The weekend before last was International Lighthouse and Lightship weekend. This is where many lighthouses around the world are opened to the public in commemoration of the often lonely and dangerous work the lighthouse keepers used to do.
The Amateur radio club I belong to, the MWRS, set up a station at Barrenjoey lighthouse on the Saturday and Sunday. 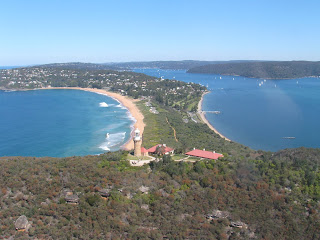 I was fortunate enough to be invited by Yves and his partner Connie, fellow MWRS memebers, to go for a flight the in Bell 47 he flies. We went from Bankstown airport to Parramatta, followed the Hawkesbury to Barrenjoey lighthouse. We circled the lighthouse twice and returned to Bankstown via the northern beaches, The Opera House and the Harbour bridge. The weather could not have been better, and the views were nothing short of spectacular. The rough route can be followed by APRS
For those not in Australia, I recommend you take the time to look at the photos.
I have uploaded the photos to my flickr account.
Posted by Mal at Tuesday, August 25, 2009