I was contacted to see if I could assist with a battery fault in a Vectrix motorcycle. http://vectrix.com.au/.
A Vectrix owner has a bike that turned out to have a faulty cell causing it to have poor performance and stopping after just a few kilometres.

I arranged a visit the bike and determine the fault.

After much thought trying to figure out how to remove the covers and expose the battery pack, we finally opened the enclosure with 102 cells arrange in two blocks. The rear block is 9 cells long, 2 wide and 3 cells deep. The front block is 8 long, 2 wide and 3 cells deep. Each set of 8 / 9 is bound by a steel compression band to prevent the cells from expanding when heated during charging and discharging. Each layer comprises of two rows of 8 / 9 in a plastic frame. Each of the 3 layers is held together by long threaded rods extending between the rows and also by duct tape around the outside of the plastic frames.

The top of the rear block was removed and some evidence of heating and corrosion was visible on one of the cells. 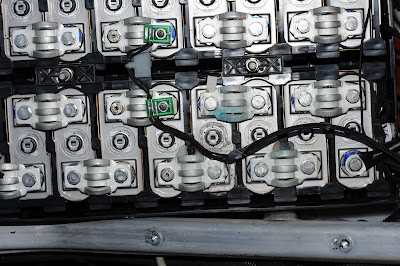 The others were consistently about 1.31V across them, we surmised that there was only one dead cell in the pack as the other strings of cells had a near perfect multiple of 1.31V across them. 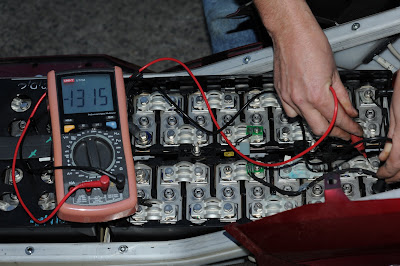 The cells in the Vectrix are 30Ah Nickel Metal Hydride cells. From GP . Replacements are available from the distributor in . Cell data sheet: http://www.gpina.com/pdf/GP30EVH_DS.pdf 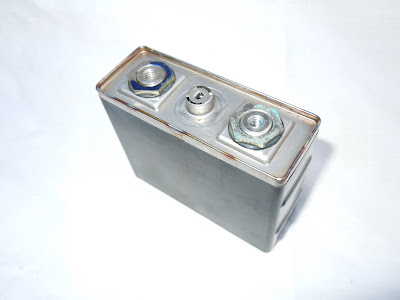 Good Cell. Some corrosion evident on terminal. This seems quite common. Cell is not swollen nor hear damaged. 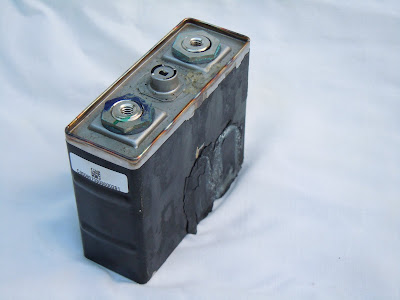 Bad Cell. Corroded where electrolyte and gas had escaped through relief valve, and also swollen and heat damaged.
I later returned to the bike to disassemble the entire pack and measure each cell voltage and check for evidence of more failing or faulty cells.
The first thing to do is to disconnect the large blue connector on top of the batteries. This breaks the battery pack up into a safer (still potentially lethal) lower voltage blocks.

The temperature and voltage sense boards were also disconnected at the connectors at the front and rear of the bike.

All the other cells were of the correct voltage (~1.3V) and had no physical signs of failure. Disassembling the blocks was fiddley. The cells are assembled in plastic frames that are then joined with steel compression bands to prevent cell swelling.
One cell had over heated and the 2 adjacent cells had suffered heat damage. The plastic holders were also melted. The pack was left disassembled as 3 new cells, and plastic frame pieces were ordered from the Australian agent.
It is important that the new cells introduced to the pack are at the same charge state as the old cells. I used a digital Radio Controlled model charger to charge the 3 replacement cells. The charger also has a discharge function so I was able to discharge the cells down to the same voltage as the existing good cells. The charger can charge at 5A and discharge at 1A. The cell chemistry, charge current, end point sensitivity etc can all be programmed in the charger. NiMH cells self discharge quite quickly. A few 10s of milivolts each day. I found that after discharging the new cells to the required level, the new cells had to be discharged further to match. I got the final voltage of the new cells to within about 10mV of the existing cells. The first balance charge on the bike would balance them further. I proceed to replace the 3 cells in a string of 9. Each ½ layer of cells is bound in steel a binding strap to prevent the cells swelling during charging and discharging.
I have made a jig for compressing the packs in order to remove and replace the steel bands more easily. To make things more tricky, the brittle locating tabs

I proceed to replace the 3 cells in a string of 9. Each ½ layer of cells is bound in steel a binding strap to prevent the cells swelling during charging and discharging. I have made a jig for compressing the packs in order to remove and replace the steel bands more easily.

An interesting point is that each cell is electrically insulated from the next by plastic spacers.

Reassembling the pack consisted of reversing the disassembly process. Extra care was taken to double check visually and with a volt meter that each 9 / 8 cell bank was reassembled correctly and the temperature and battery voltage monitoring sensors were installed in the correct locations. 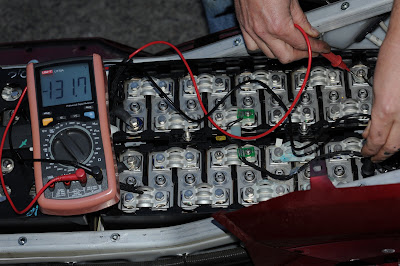 All interconnects and battery terminals that had been removed were tightened to a specified to torque of 10Nm.

After reassembly the owner took the bike for a ride and came back with a memorable grin. The bike performed better than it had for a long time.

The final task for the owner is to deep discharge the pack 5 times to condition the batteries and ensure longevity of the new batteries. This procedure is recommended by Vectrix to remove any ‘memory’ effect in the batteries in order that they can provide the maximum usable capacity.